The first time I even heard of Marvel’s Spider-Man: Miles Morales (referred to from here on as MSM:MM) was at the start of Sony’s PlayStation 5 showcase back in June. At the time, I had postulated, “Considering the polished gameplay, gorgeous graphics and engaging story — not to mention three substantial and equally engrossing DLC chapters — of Insomniac Games’ 2018 offering, Marvel’s Spider-Man, there’s reason to believe we may have another ‘Game of the Year’ contender on our hands.”

What a difference five months make.

I’m not sure about the exact criteria followed by the Game Awards committee, but it seems unlikely that a DLC- or expansion-length entry (with very little that’s new apart from the story and main characters) could qualify for the annual gong, never mind win it. And if I’m coming across unduly harsh, I should take a step back and explain.

Set a year after the events of Marvel’s Spider-Man, MSM:MM sees the titular Miles — whose origin story was touched upon briefly in the first game and in a lot more detail in the 2018 animated film Spider-Man: Into the Spider-Verse — take on the role of New York’s guardian in Peter Parker’s absence. This isn’t because the game kills him off at the start, which would be quite a novel and ruthless way to kick off a new generation of gaming, what with MSM:MM being a launch title for the PS5 that releases next week in some parts of the world.

Instead, Peter takes a much-needed break from all the web-slinging, zipping, ducking, diving and fighting of the Big Apple and accompanies high-flying journalist Mary Jane Watson to Symkaria (a location in Europe that’s as real as Wakanda or Sokovia) as her photographer. While Miles is coming to terms with his new and not-so-new powers and the accompanying responsibilities, his widowed mother Rio (following police officer Jefferson Davis’ death in the previous game) has taken a plunge into public service and is gearing up for a local election.

This provides the setting for you to step into the shoes and impossibly skin-tight suits of Spider-Man. And it all looks a bit like this:

If you’ve played Marvel’s Spider-Man, there’s a couple of new things you’ll notice about the gameplay: First, traversal across New York feels a lot zippier than in the original and Miles appears to hurtle, tumble and fall through the air rather than glide, dive and soar as Peter did. This makes sense given Miles is a rookie compared to Peter, the relative veteran, and is still learning the ropes, so to speak.

The second notable new development is that combat seems ever-so-slightly slowed down, but it makes a significant difference when pulling off counter-attacks and dodging enemy attacks. That extra fraction of a second (or slightly more) provides a bit more breathing space to strategise your attacks and whittle down the waves of enemies before you find yourself overwhelmed. 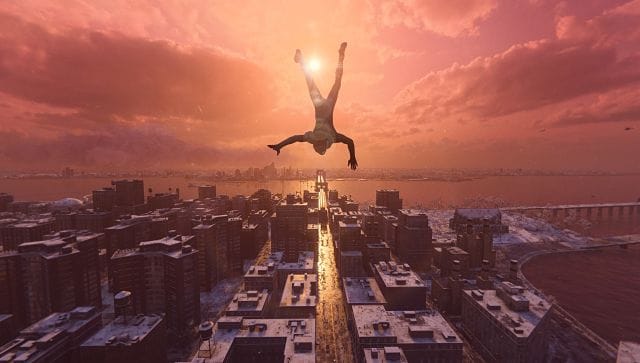 The third big development is camouflage mode. Coming as it does reasonably early into your adventure, this is a game-changer from a tactical standpoint. It may be recalled that Marvel’s Spider-Man allowed you to unlock the Stealth Suit that created a distortion field which could obscure you from the view of non-alerted enemies. Available only from Level 23 onwards, this usually came at a stage when you were already comfortable with your tactics and didn’t really need to go invisible or near-enough.

In MSM:MM though, the early availability of camouflage mode — which essentially turns you invisible for a few seconds (longer if you stay still and away from enemies) — allows you to orchestrate elaborate set-pieces or stealthily pick off enemies one-by-one like a certain caped crusader. And if you feel this makes things too easy, you are well within your rights not to activate the mode. ‘Into the Spiderverse’ mode in Marvel’s Spider-Man: Miles Morales

One aspect played up from the reveal trailer was the latest arrow in the new Spider-Man’s quiver: Bioelectricity. This lends itself to ‘Venom’ attacks and mid-air bursts of speed. And while this might seem like a new development, those of you who’ve played Marvel’s Spider-Man will recognise the ‘Venom’ attacks as repackaged versions of certain strikes that were available as you unlocked higher branches of the skill tree. Bioelectricity also turns Miles into a super-electrician of sorts who frequently finds himself tasked with returning electricity to warehouses, residential buildings, industrial complexes etc.

That, by the way, isn’t all he does in his spare time. When he isn’t playing super-electrician, he’s playing super-plumber, chasing pigeons (like Peter before him) and collecting a whole host of different collectibles (also like Peter before him) from various parts of Manhattan. While some of the side quests and treasure hunts present a different challenge to those in Marvel’s Spider-Man, it eventually turns into a case of more of the same. But, if it ain’t broke, don’t fix it, as the adage goes. 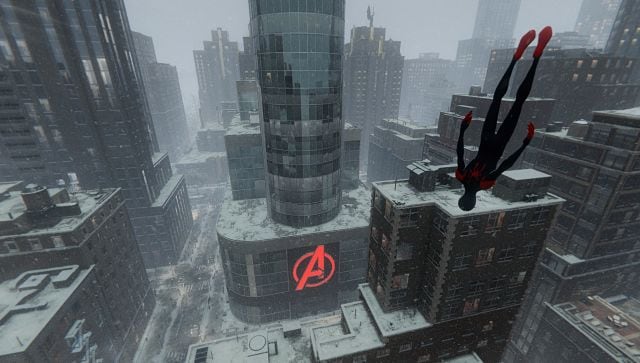 This brings us to the story and bearing in mind that it is such a short one as also the need to avoid spoilers, I’ll steer clear of as many specifics as possible. A focussed run through the main story — while completing a tiny amount of side quests, missions and treasure hunts alike — takes between four-and-a-half and five hours. That, incidentally, includes the lengthy (not quite Hideo Kojima-esque, but almost) cutscenes that are largely well-acted and directed, and also devoid of any egregious or significant facial animation issues. A more complete run through the game, encompassing side missions, training missions, enemy bases and collectibles, takes around nine hours or so.

Despite its brevity, the tale of a young Miles finding his way is told well enough even if the emotional climax feels like a bit of an abrupt escalation and feels a bit unearned in light of the languorous build-up. Sprinkled with a few nice Easter eggs, the story features some nice beats about friendship, revenge and sonhood, while lightly touching on the themes of identity and inequality. Unfortunately, the paucity of key characters in the story means reveals aren’t all that shocking and become fairly predictable very soon. And while the overall story is fine, the trope of two rival organisations — warring with each other and Spider-Man — feels like a rehash of 2018’s rivalry between Mr Negative’s Inner Demons (despite sounding like the name of a cracking self-deprecating autobiography, it’s not one) and Silver Sable International that often spilled out into the streets and caused collateral damage. This time around it’s the shady Roxxon Energy Corporation at war with a gang known only as The Underground. As always, ol’ webhead’s stuck in the middle of it all.

Overall, MSM:MM feels lighter, breezier and more DLC-like (or expansion-like) than Marvel’s Spider-Man and this isn’t all that surprising. After all, Insomniac Games’ Brian Horton had warned that this wasn’t going to be Spider-Man 2 and that instead it would be “more akin to a game like Uncharted: The Lost Legacy in terms of overall scope”. The fifth game in the Uncharted series, to which Horton alludes, is a shorter spin-off than the full-length adventures of series protagonist Nathan Drake and sure enough, MSM:MM feels a lot like that. Unfortunately, while Uncharted: The Lost Legacy cost Rs 2,499 at launch, MSM:MM costs an eye-watering Rs 3,999 and Rs 4,999 if you want the Ultimate Edition (as of now, this has only been advertised for PS5) that includes a remastered version of Marvel’s Spider-Man. I have no doubt that the PS5 version of the game will benefit from technology on offer with the next-generation PlayStation, however, on PS4, charging full price for such a relatively tiny game seems unjustified. Sure, wintry New York looks gorgeous, the soundtrack’s entertaining enough, the action’s engaging and the experience never gets boring, but Rs 3,999 for this?

Perhaps this is the direction in which AAA titles are going in the next generation of gaming, with shorter runtimes and higher costs. Maybe games are getting more expensive to manufacture and maybe we’ll all have to eventually bite the bullet and give in or stick to playing only the indie titles. Regardless, that bridge will be crossed when it arrives, because for now, Marvel’s Spider-Man: Miles Morales, despite being an absolutely fine experience, certainly isn’t the game for which I’ll be biting the bullet.

Marvel’s Spider-Man: Miles Morales is like fine dining: a high-quality experience that’s over way too soon, leaving you hungry and clutching a fat bill. P.S: No, I didn’t even mind the Peter Parker face change all that much, particularly since you barely see it in this blink-and-you’ll-miss-it outing.